Reviews steps for outlining a novel as described in K.M. Weiland’s book “Outlining Your Novel”.

Me to self: “I should start writing something. I could have another book done in like a year if I follow the process in that book. It doesn’t have to take as long as the last one—it will be so organized!”

I’m trying to bribe myself with a new notebook. It’s got flamingoes on it. It’s clean and new, thick and thirsty and ready to soak up the ink of my ideas. You know what the problem is, though… What if the story I pick doesn’t pan out? What do I do with the notebook then? Do I start another one in the same notebook?

Fine, just use a new notebook. There are plenty of notebooks in the world. You can repurpose this flamingo one later—seriously, you’re good at repurposing, trust yourself. Furthermore, fear of ruining a notebook is a damn stupid reason to not start something. You have permission to fail! To start again! To waste paper, time, words, and ink! 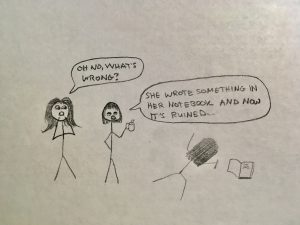